The Faculty Academic Renewal (FAR) Funds, commonly known as the Academic Senate’s Chancellor’s Fund, were established in 2014 as a gift from Chancellor Hawgood. Promised through the academic year 2024 by Chancellor Hawgood, the funds serve to support faculty life through small individual and group grants totaling the annual amount of $500,000. 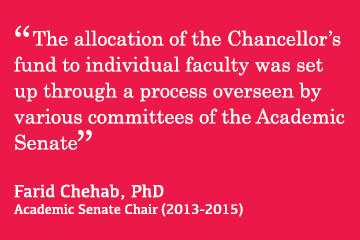 Since its inception the awards’ intention has been to fund as many different faculty and projects as possible across school and site lines. This means all faculty series are eligible including Ladder Rank, In Residence, Clinical X, Health Sciences Clinical, and Adjunct. Applicants must be at a minimum 50% UCSF appointment time, at Assistant Professor level or higher, and cannot be without salary.

Farid Chehab, PhD, Professor in the Department of Laboratory Medicine served as Academic Senate Chair from 2013-2015 and was instrumental in the creation of the Chancellor’s Fund.

“There are some expenditures that are not covered by NIH grant funds, such as non-laboratory supplies, personal courses and some types of travel,” Chehab said. “Instead of those funds coming out of faculty’s personal or discretionary accounts, the Chancellor’s Fund gives [faculty] another way to obtain funds for these types of activities.”

Chehab also added that since its inception, the allocation of the Chancellor’s fund to individual faculty was set up through a process overseen by various committees of the Academic Senate whereby each Committee received a proportion of the funds and distributed it to faculty. In this way, distribution of the Chancellor’s fund became entirely a faculty-driven mechanism. It was also an added benefit that all four Schools matched some parts of the funds based on what they perceived as relevant to their respective missions.

From the first round of funding and forward, one third of the full Chancellor’s gift has gone to pre-existing campus mechanisms such as the Library’s Open Access Fund, additional childcare slots, or to supplement CTSI’s Under-represented Clinical & Translational Science grants awarded through the Research Allocation Program. The remaining funds go to support three specific pathways: educational learning not funded by other grants or administrative funds (Learning & Development Awards), travel to research or education conferences (Travel Grants), or the purchase of small items or services for professional purposes (Enrichment).  Faculty who are traveling to conferences to learn new clinical skills are covered by the Learning & Development Awards.

Lyndon’s grant was used for diversity and inclusion training in the School of Nursing, Le’s grant for global health education and ethics training, and Lipnick’s grant focused on development and support of a Global Health faculty program. Two were funded under the Learning and Development pathway, another through Educational Technology (now included under Enrichment).

“The Chancellor’s Fund improves morale, by allowing faculty to feel valued by submitting an idea and getting it approved,” Lyndon said.

For additional information and to apply for the 2017 UCSF Academic Senate Chancellor’s Fund, please visit https://senate.ucsf.edu/chancellors-fund. Be sure to also review Comments from Past FAR Fund Recipients found under Additional Information.

Diversity in Action in the School of Nursing

Audrey Lyndon, PhD, received a FAR Award in 2015. Lyndon served as the primary investigator for the $10,000 grant on behalf of the School of Nursing for the Diversity in Action committee (DIVA), which focuses on incorporating applicable tools to combat potential bias related to diversity and inclusion in clinical and classroom settings.

DIVA faculty wanted to further enhance their skills in teaching other faculty about creating and sustaining an inclusive environment. They completed the training for DIVA faculty facilitators through World Trust Educational Services, a non-profit social justice organization based in Oakland that supplies group training resources through films, workshops and courses that discuss bias and systemic racial inequity in a variety of settings.

“World Trust designed a training for us composed of a number of exercises that we did as a group that was led by our instructor [and founder and president of World Trust], Dr. Shakti Butler,” Lyndon said. “She helped us dig deeper into issues around structural racism and equity and inclusion and how to facilitate stronger conversations around equity and inclusion using a model called strategic questioning.”

Butler’s customized seminars and trainings were divided into four faculty training sessions spread across a year. Roughly twelve nursing faculty participated in the training. Additionally, Butler observed and provided feedback on sessions taught by DIVA facilitators for other School of Nursing faculty. “Having Dr. Butler observe was phenomenal and helpful, because we were able to receive real-time feedback and were able to revamp and make improvements between the first and second session [of the class we teach],” Lyndon said. “The first session was good, but the second session was even better.”

DIVA has been providing the School of Nursing with ongoing training on diversity and inclusion for many years. The support from the Chancellor’s FAR fund provided a unique opportunity for experienced DIVA faculty to engage in their own development as facilitators, and to train new faculty facilitators. Lyndon said the training encouraged nursing faculty within DIVA to continuously make revisions to their internal training materials, and has expanded DIVA’s capacity to partner with others on campus.

“I have noticed that the training has given DIVA faculty more energy and allowed us to bring our work to another level,” Lyndon said. “We have accomplished more than we might have otherwise, because of the development we engaged in with the Chancellor’s Fund.”

Education & Ethics in a Global Community

Phuoc Le, MD, used Chancellor’s Funds received during the inaugural year towards educational technology efforts through the Kanbar Simulation Center. Le’s grant was provided by the Committee on Education Policy.

“In global health education pre-departure training is so important given the potential for harm that can be done in resource-limited settings,” Le said. “We wanted to develop a simulation based ethics training module for trainees at all levels.”

Through the Center, Le hired actors as standardized patients and developed a curriculum for UCSF professional students known as Ethics Simulations in Global Health Training (ESIGHT). Currently, ESIGHT is used to train fellows in the HEAL Initiative. HEAL stands for “heal, equity, action and leadership.” The initiative seeks to provide equal health to all and focuses on Native American reservations, prisons and remote villages around the world. HEAL also provides fellowships for health professionals domestically and internationally.

To mimic a global health setting of a rural village in Malawi, bamboo huts were built and actors were trained to speak and dress similar to the setting.

“We tried to duplicate the setting as much as possible, even down to playing sounds of children playing in the background or chickens clucking,” Le said. “We tell participants to suspend disbelief and allow themselves to be in that scenario.”

Each simulation lasts a half-day. Participants are presented with an ethical dilemma and given ten minutes to determine a next step. In one scenario, a student was told that a woman’s daughter had been in labor for three days and now had a fever. However, she was unable to travel to the nearest hospital, because her husband was away and in their culture, it is not acceptable for women to travel without male supervision. In the limited time, the student had to best address the ethical dilemma of whether to risk the woman’s life or risk her chance of being ostracized for traveling without male supervision.

“Based on feedback we have received thus far, participants have told us it feels real and in the moment, they had feelings in their stomachs that was similar to ethical situations they have encountered before,” Le said.

Participants reported to Le that the hands-on experience allowed them to develop a long-term memory over what they learned, as opposed to only learning through a textbook. Since the first global health simulation in 2015, Le has successfully completed two global health simulations a year and has trained 200 people in various health fields, including dental, medical and nursing.

“We have also exported the simulation,” Le said. “Northwestern University [Feinberg] School of Medicine reached out to us and asked us to come replicate this in their Medical School, so I went to Chicago and trained some of their actors in their simulation center, which was a rewarding experience.”

Michael Lipnick, MD, teamed up with five other faculty members to encourage just that- teamwork amongst faculty in the School of Medicine who had a passion for global health.

“At UCSF there isn’t a global health school, department or even a division,” Lipnick said. “As a result, faculty who participate in global health projects are not even aware of each other. Through the Faculty Affiliate Program, we are trying to bring together faculty involved in global health research, education or policy from multiple disciplines, departments and schools and have them interact professionally.”

The Faculty Affiliate Program began in spring 2016 and has had 300 faculty members sign up in the first six months. The program has had multiple activities supported by the Academic Senate funding including a monthly lecture series at Mission Hall. The series features two faculty affiliates or a visiting speaker, who present on their global health passions.

“The funding we received also allowed us to record and livestream the lectures, which we then upload to the Global Health Sciences website and YouTube,” Lipnick said.

The funding also helped support food and refreshments at the lectures as well as a ‘Global Health Lunch Bunch,’ that pays for collaborative lunches involving multiple Faculty Affiliates from different departments who meet for a meal to discuss Global Health efforts. Lipnick said while food may seem a simple thing, it has helped entice global health faculty who are spread out across various campuses to connect and share ideas.

Kathryn Sill is a  Communications Specialist in the Academic Senate Office, San Francisco Division. She can be reached at kathryn.sill@ucsf.edu.